Parathas and Mango Chutney (A How-To)

Easy homemade paratha recipe. These parathas are served with a quick & easy no-cook mango chutney. So easy, and so delicious. 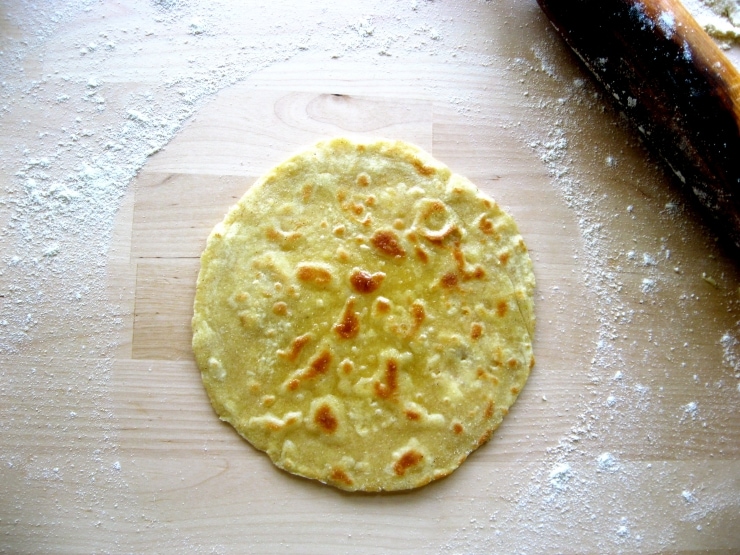 Some people find Indian food to be intimidating to make. Parathas can be, especially. Heck, I thought it was at first. I guess Indian food is so intimidating because of all the preparation required to make a meal. There is probably not one thing in Indian cuisine that does not require a great deal of preparation and a great deal of cooking time. When it comes to cooking Indian food, you have to love to cook. The same goes for these Parathas.

I know that being able to cook at the age of six has always been a great advantage for me. It gave me more time to “master” all of the basics of Indian cuisine, “American” cuisine, and even Spanish cuisine. One of the most basic things in Indian cuisine that I learned to make as a child were parathas (Indian flat bread). I know that some people may not consider making parathas basic, but it’s considered basic in Indian and Pakistani cuisine (at least I think so).

This post will probably be one of my longest posts, but it’s well worth reading, especially if you love Indian food. I will provide you with step-by-step instructions (with photos) for paratha making and I will share my recipe for a simple mango chutney.

For my sweet and savory mango chutney, you won’t need 20 different indian spices and 6 different types of vinegar or other things necessary to make a complicated chutney. All you’ll need are some basic ingredients that most people have in their pantry and a mango. Yep, that’s it! Nothing too complicated here…

My paratha recipe yields 15 parathas, but you can definitely halve the recipe if you don’t plan on making that many parathas.

So without further ado, here are the recipes:

1. In a large mixing bowl, mix flour and salt together (yes, with your hands). But, if you’d like, you can use a food processor for this. I wouldn’t use the dough attachment just because it doesn’t get along the sides of the machine- the regular attachment usually does.

2. Gradually add the water. Depending on humidity and the brand of atta that you are using, you may or may not need all of the water, so add it slowly just until a dough forms. If you’d like softer parathas, add more water. Be forewarned, however, the dough will be a little more difficult to work with. I prefer my parathas to be semi-soft because I like to smother them with mango chutney, which ends up making them a bit softer.

3. Knead the dough for about 5 minutes. Half way through the kneading process, work the oil into the dough until it feels soft and smooth. The oil used in this process will prevent the dough from forming a skin while it rests.

4. Cover the dough and set it aside to rest for 15 minutes. 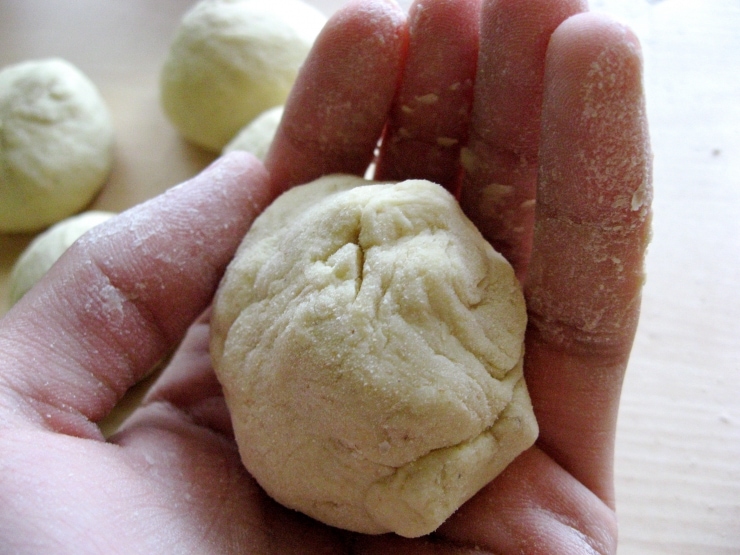 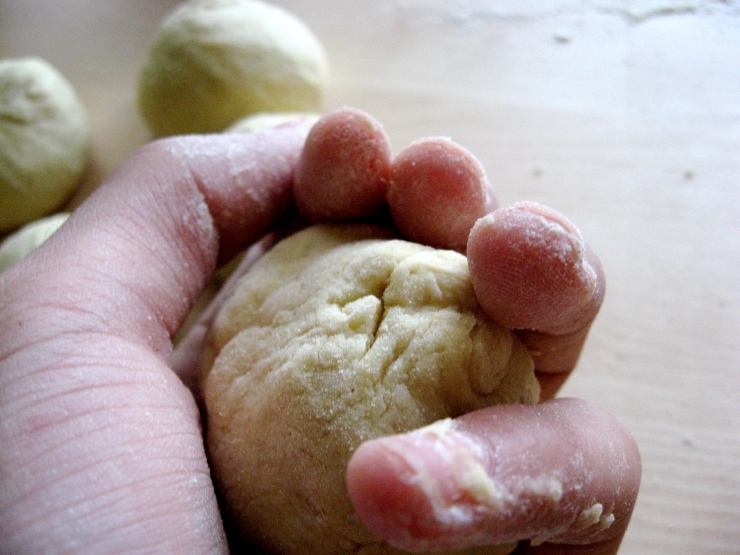 5. With floured hands, divide the dough into 15 dough balls (a little larger than a golf ball). 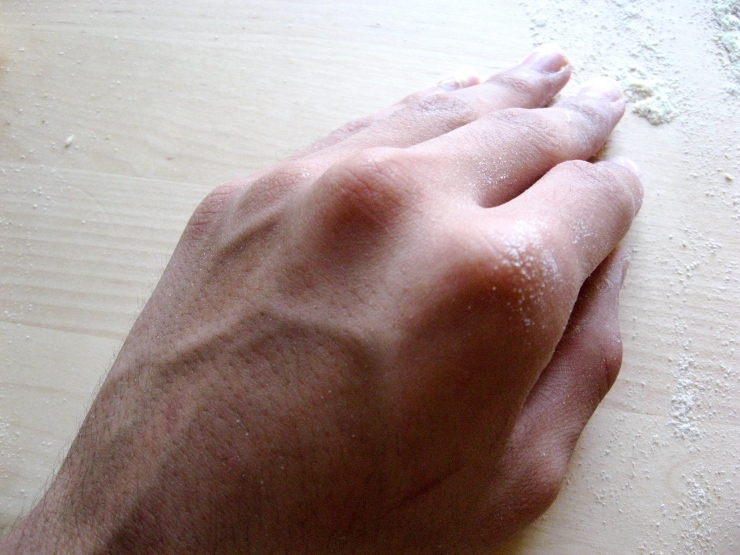 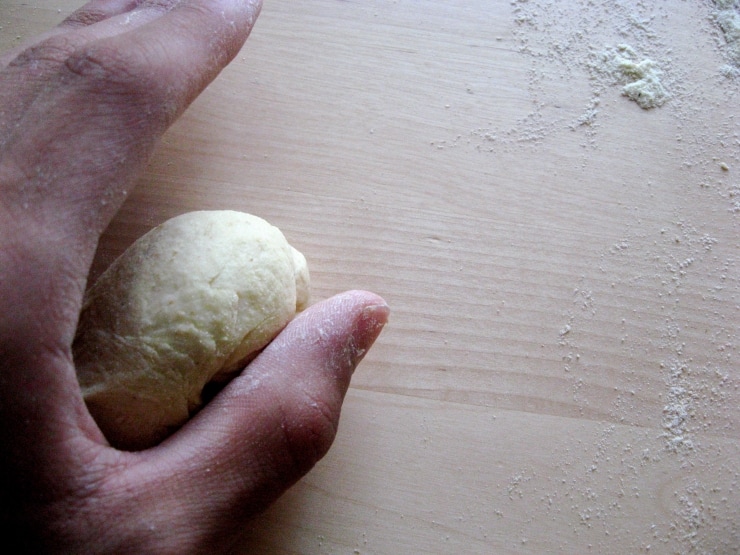 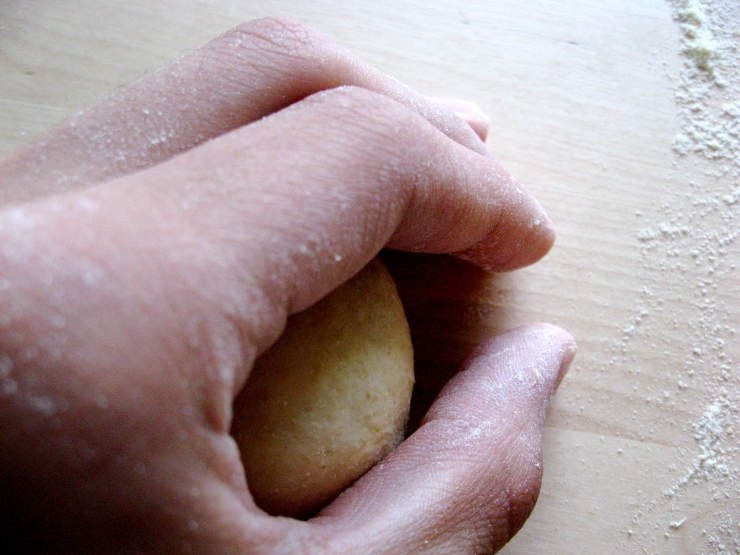 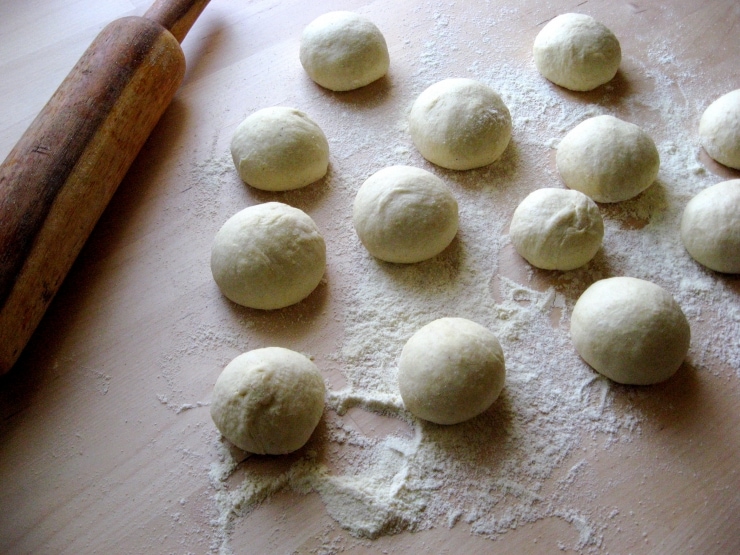 6. Now, take a dough ball, and press it gently against the table (or whatever work surface you’re using) moving your hand and the ball in a circle pulling the dough into itself while reducing the pressure on top of the dough slightly until a perfect dough ball forms (like the picture above). Repeat with 14 other dough balls.

7. Let the dough balls rest on a floured work surface for 30 minutes to an hour. This step is optional, but should be completed if you would rather have softer parathas.

9. Flatten a dough ball out onto a floured surface.

10. Dredge the flattened dough ball in flour (on both sides)

11. Roll the dough into a circle, about six inches in diameter. 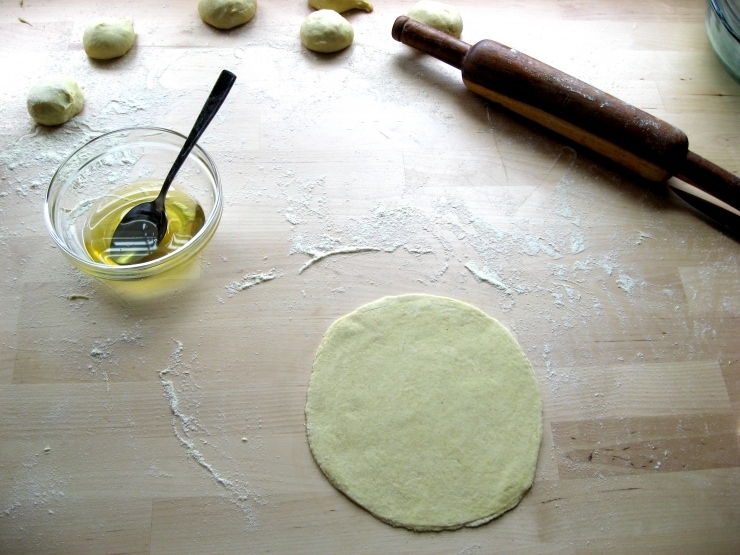 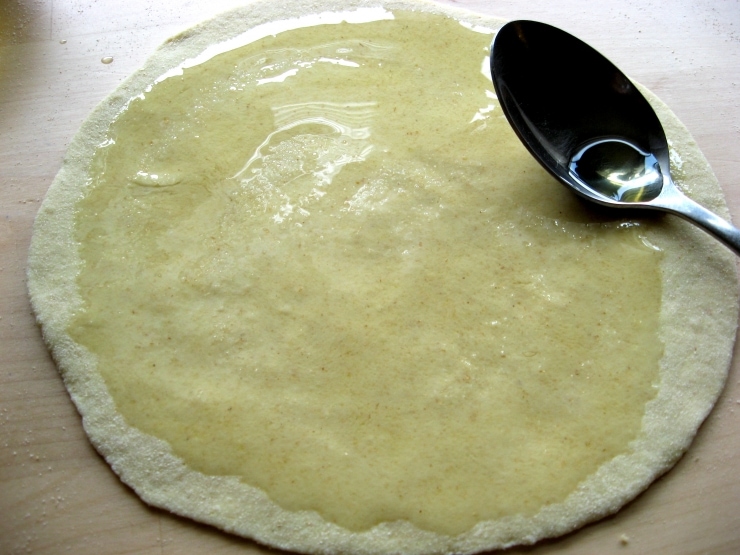 Now, here is where it can change up… There are so many ways to create “layered” parathas, the following 2 (yes, two!) methods are a matter of preference. The first is easier than the second, so do keep that in mind.

13a. Cut a straight line half way down the paratha disk with a knife. Then, take one end and begin to roll it counter-clockwise forming a two-dimensional conical shape (really technical, huh?) 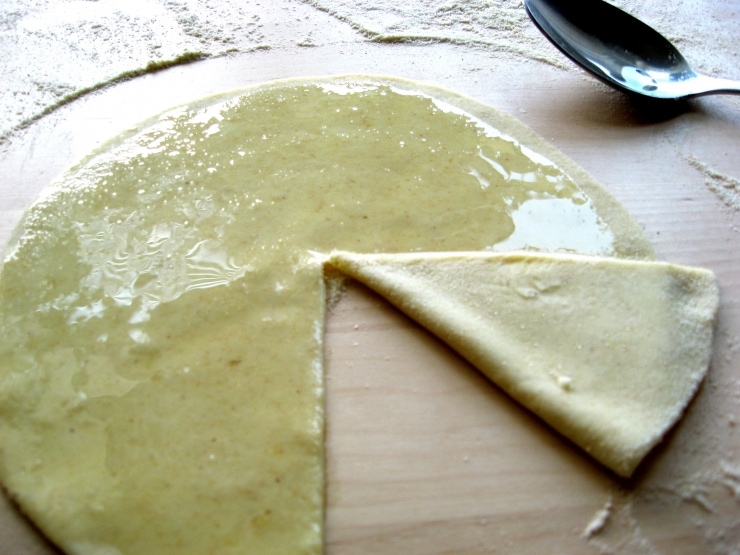 14a. After the conical shape is formed, stand it up and find the center of the folds. Gently, take the center folds and push them down to form a patty. Dredge the patty in flour and roll it out into a circle 6 inches in diameter. 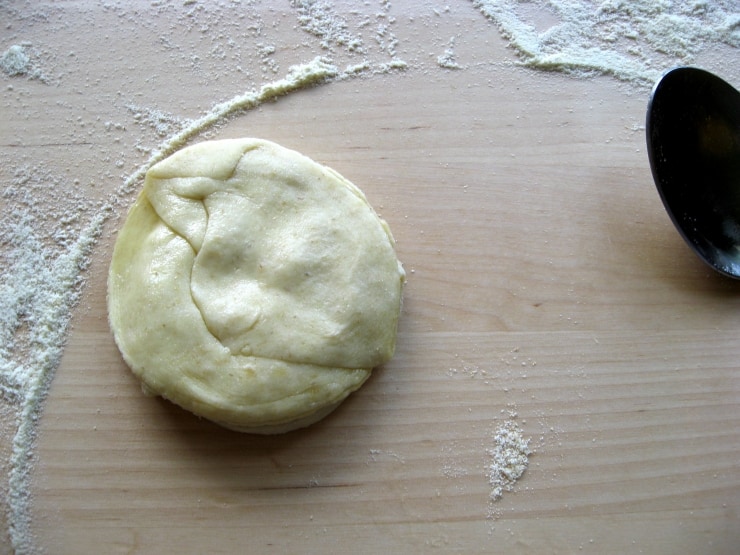 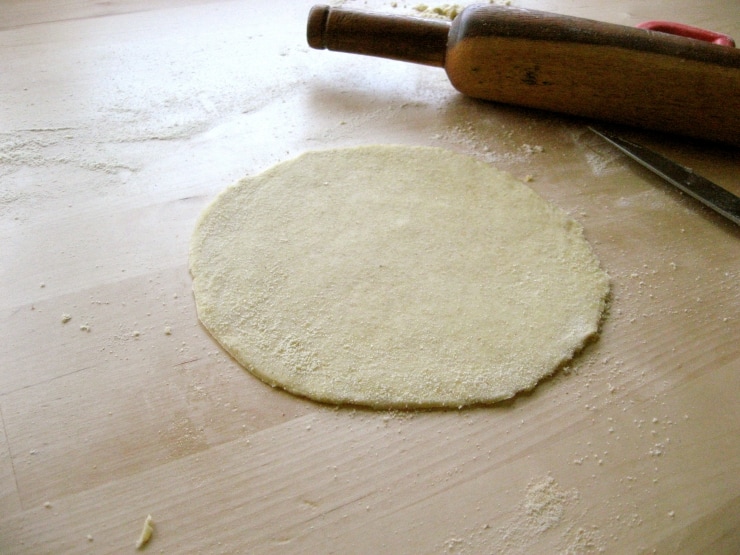 For the more complicated version: 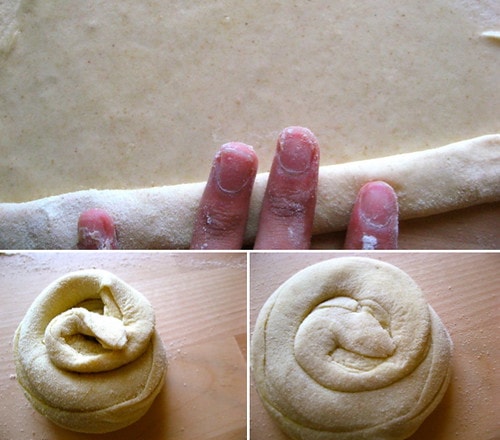 13b. Take your oiled paratha, and begin to roll it up making sure that the oil is not on the outside of the paratha. 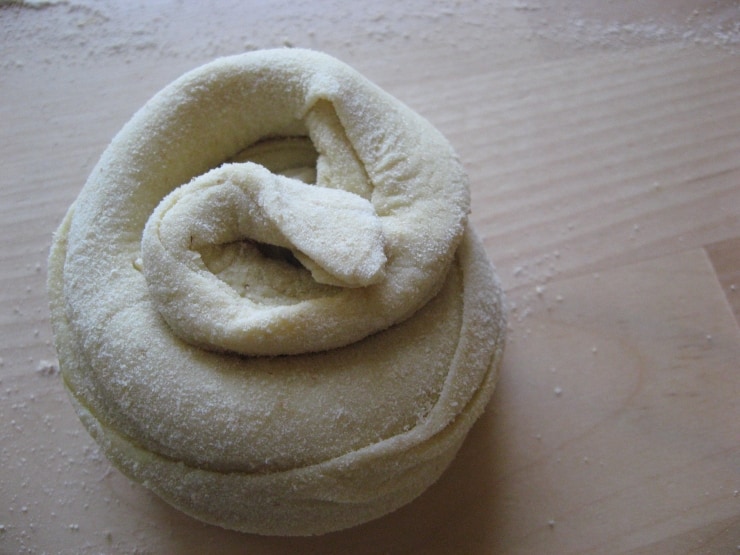 14b. When you have a cylindrical shape, begin to form it into something like the above picture, making sure that the top end is on the top and the bottom end is on the bottom.

15b. Press it down and form into a patty. Dredge in flour and roll out into a circle six inches in diameter.

NOW FOR THE COOKING!
The cooking is the same for both techniques, so don’t worry…

16. Place your paratha on your heated skillet or tava. You’ll see the color of the paratha change and it will begin to puff up in certain places. Turn the paratha over.

17. Check the paratha for golden-brown blotches all over it. Allow the paratha to cook for a few seconds, then add enough oil to coat the top half of the paratha.

19. Now, with your spatula, lightly press on the puffed areas to help allow the paratha to fully puff up. Make sure the paratha has golden-brown blotches on both sides, and place it on an oven-proof plate in the oven, or place it in a casserole dish or tortilla keeper.

Serve with mango chutney or any Indian dish such as Aloo Gobi, curried chicken, or a nice healthy bhindi masala (spiced okra) .

Parathas can be stored in an air-tight container for up to two days.

The traditional means of cooking a paratha is in a large, flat concave iron skillet called a tava or tawa. However, feel free to use a cast iron skillet for these. It should do the trick!

Dice the ripe mango into small pieces and place in a medium-size bowl.

Mash the mango pieces with your hands or with a potato masher. Don’t over-mash because you’ll end up with liquid chutney. 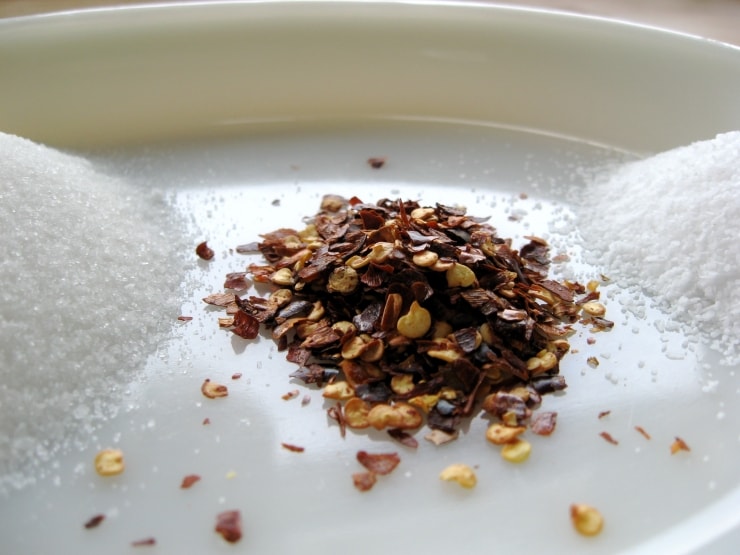 Store in the refrigerator before serving with parathas or serve at room temperature. 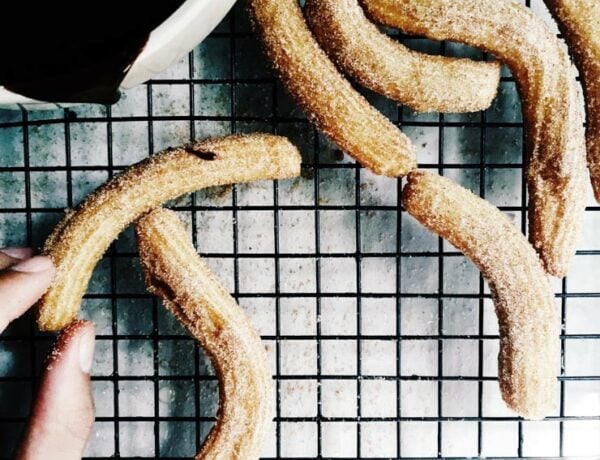 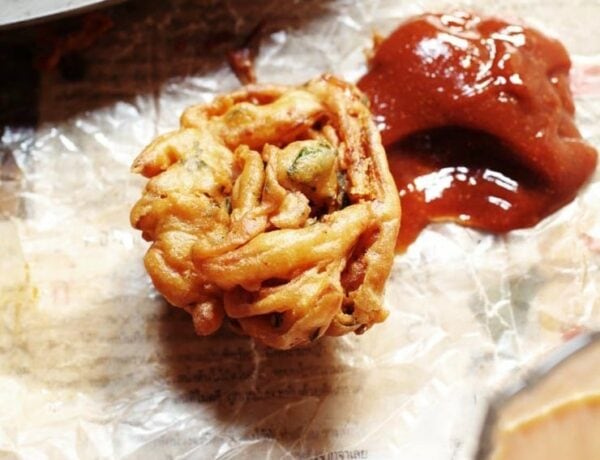