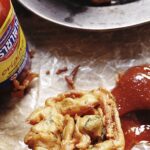 Learn how to make an authentic Onion Pakora / Onion Bhajis recipe, a crispy fried Indian / Pakistani snack. Pakoras are made with chickpea (gram) flour, onions, and spices you already have on hand. Or make vegetable pakoras with some of your favorite vegetables!

No matter the day of the week or the season, Pakoras (both onion pakoras and vegetable pakoras) always call for your attention on any day. Also known as Bhajis, this pakora recipe results in the most delectable afternoon snack or appetizer as an accompaniment to your favorite Indian or Pakistani dinner.

This is my mother’s onion pakora recipe; when she first married into my father’s Indian and Pakistani family, she learned from my favorite aunt how to make the best bhajis. This is truly a comforting midday snack meant to be enjoyed with your favorite chutneys and a cup of strong milky tea.

Across India and Pakistan, enjoying cup of chai with a pakora or two is a popular street snack of choice. Onion pakoras are a popular variety, but other quick-cooking vegetables like potatoes, cauliflower, carrots, red bell peppers (capsicum), and spinach make for delicious pakoras.

Pakora Recipe: What Are Pakoras?

Pakoras (pakodas) are a savory fried Indian / Pakistani fritter that is commonly enjoted as an afternoon snack or as an appetizer. They are commonly served with chutneys (sauces) and strong tea. For this pakora recipe, I made onion pakoras because it’s what I love, but you can use this batter recipe as a guide to make your favorite kind of vegetable pakora (more about veg pakoras in the recipe notes).

Ingredients for the Best Pakoras

When it comes to making pakoras, it’s as simply as mixing everything together. There’s a few basic ingredients you’ll need for this pakora recipe:

How to Make the Best Onion Pakora Recipe for Crispy Pakoras

Pakoras are incredibly easy to make. They require a few components: the pakora chutney, the pakora batter, and the fry.

Pakora Chutney – The chutney I’ve shared with this recipe is far from complicated. It is a deliciously modern ketchup chutney; simply mix together ketchup, water, chaat masala, some sugar, and salt, and you have a delicious dip for your pakoras.

The Pakora Batter – Pakora batter comes together in no time, so you’ll want to heat up the oil while you’re preparing the batter. For the batter: gram flour (chickpea flour), crushed red chili flakes, salt, baking powder, green chili, cilantro (coriander) and vegetables (in this case: an onion) are mixed together with water until the batter reaches the consistency of heavy whipping cream / double cream.

Frying Pakoras – The oil for the pakoras should be between 360ºF / 180ºC and 375ºF / 190ºC when you fry off spoonfuls of the pakora batter. I like the clean flavor of sunflower oil, but any neutral-tasting oil like safflower, peanut, canola, or vegetable oil would work perfectly here. When frying the pakoras, make sure to not overcrowd as each pakora will end up greasy.

Tips for How to make the Best Pakoras

• Make sure to not over-crowd the pan with pakora batter – this will lower the temperature of the oil and you might end up with greasy pakoras (there’s nothing worse than a greasy onion pakora!).

• Don’t use paper towel to drain your pakoras – when it comes to fried foods like these pakoras, paper towel simply makes fried foods steam and get soggy. To ensure your pakoras stay crisp, drain them on a cooling rack placed over a baking pan. This will allow the excess grease to drain without making them soggy.

How to Serve Pakoras

I love that pakoras can bring brightness to a dreary day and act as the ultimate comfort food. They’re a delicious treat I grew up on. We’d eat them as a midday snacks with a cup of hot masala chai. I love how imperfect and rustic a pakora is once out of the hot oil– it’s simply irresistable. Traditionally, pakoras are served with various chutneys (sauces) such as the sweet and spicy pakora chutney accompanying this recipe and a steamy hot cup of masala chai.

Feel free to use your favorite quick-cooking vegetables in place of the onions to make your own delicious veg pakoras. Potato and sweet potatoes might not work very well here, unless they’re already pre-cooked.

While I am partial to onion pakoras, feel free to experiment with the batter. Boiled potato slices, carrots, red bell peppers (capsicum), cauliflower, or spinach would work here.