The simplest and very best Spanish churro recipe. This Churros Recipe is great for any time of the year and perfect served with chocolate dipping sauce. 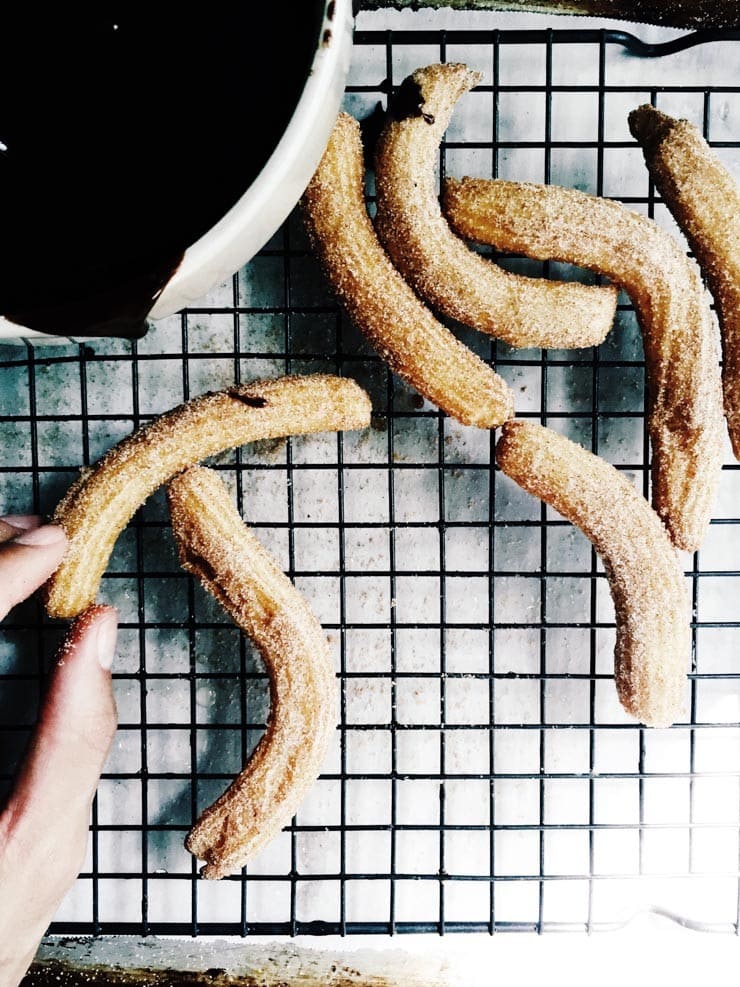 New York is the city that never sleeps (and I can’t sleep because I’m day dreaming about this churros recipe); it is a melting pot of sizzling cultures packed into five boroughs– the Bronx, Brooklyn, Queens, Manhattan, and Staten Island. New York City is my home. It’s where I grew up enjoying churros, and it’s where my obsession with cooking and baking began as a young child.

I have always traveled around NYC using the preferred method of transportation- the subway, which is used by most New Yorkers on a day-to-day basis. Being a born and raised New Yorker, using the subway becomes something that has been etched into my blood.

To keep it real, trains are always packed like a can of sardines and never smell like freshly baked these or hot chocolate. There is usually a noxious odor permeating through the air as you sit in a train car trying so hard not to make any facial expressions at the man sitting next to you who’s sweating like he’s about to give birth to a 20 pound watermelon and smells as if the last time he showered was 2 months ago. You just sit there… Reading, listening to music, staring at people, or just begin to stare into space. You pray to God, begging him to make the stinky man’s stop come up. After 5 stops, mister stinky leaves, you take a deep breath, and you let out a sigh of relief thinking, “THANK GOD!”

Suddenly, your train car sees daylight and is heading towards Jackson Heights; a door in the rear of the train car opens and an elderly hispanic woman is screaming over the noise of the train, “Churros. Churros…” She is pushing a cart with a baking sheet piled high with churros that are carefully covered in shrink wrap. This is not the first time you’ve seen one of these ladies selling this famous latin american doughnut, so you give in and buy two churros off of the sweet elderly woman. She returns three singles back from the five dollar bill you gave her and hands you the two churros in a paper bag. You immediately begin devouring one of the churros. She smiles and pushes her cart to her next customer. 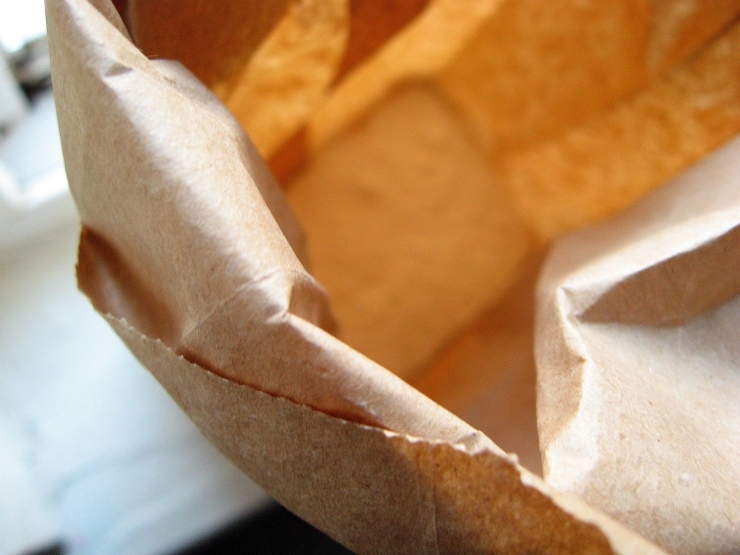 It’s your stop on the train. You save the paper bag from the churros (to recycle!), and proceed to walk home. When you finally get home you wish you had saved one of those churros for some late night snacking. An idea pops up in your head to make homemade churros. A churros recipe! Brilliant. You do a simply Google search and get nothing that pops out to you. Food Network recipes are good, but you’re tired of “twisted” versions of things, so you almost give up. This is where I come in and say to worry no more. This is the ultimate churros recipe! This famous “subway treat” can be made at home and enjoyed with a nice cup of hot cocoa or dipped in a luscious fudge sauce. So regardless if you’re from New York City or not, all you have to do is go into your kitchen and pull out a few simple ingredients necessary to make these treats! Churros are super simple to make and can be made to any size and shape that you’d like !

This churros recipe starts off with some water, butter, sugar, and a bit of lemon zest– all of this is brought to a boil. 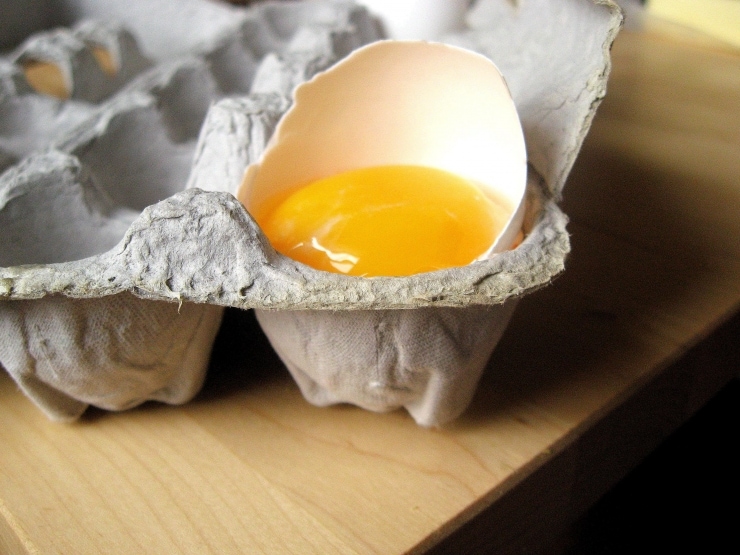 After your water mixture comes to a boil, remove the pan from the stove and add in your flour. Mix it on medium heat until the dough forms into a smooth, uniform ball. After the ball is made, you have to wait a few minutes until the dough has cooled enough so when you add the egg (make sure it is at room temperature), it doesn’t curdle. After the dough has cooled for about 3 minutes, put the dough into a stand mixer or a large mixing bowl, add the egg and mix (the mixture will look coagulated and slimy at first, but then it will mix into a beautiful, shiny, smooth dough. 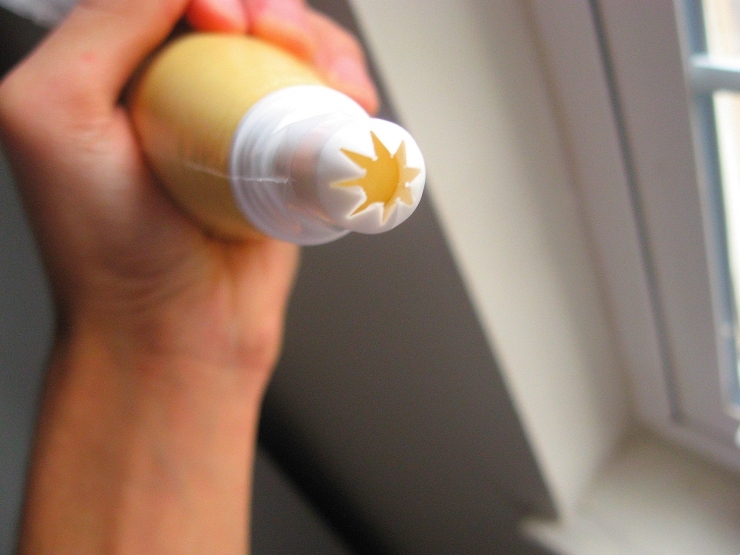 Spoon the dough into a pastry bag fitted with a star tip. For this churros recipe, any size is fine, just as long as it is a star tip. I couldn’t find my huge star tip, so I used the small star tip that came with my disposable piping bags. Once the mixture is in the bag, heat up some oil (in this case, the more, the better because you don’t want the churros touching the bottom of the pan) until a deep-fry thermometer reads 375ºF. 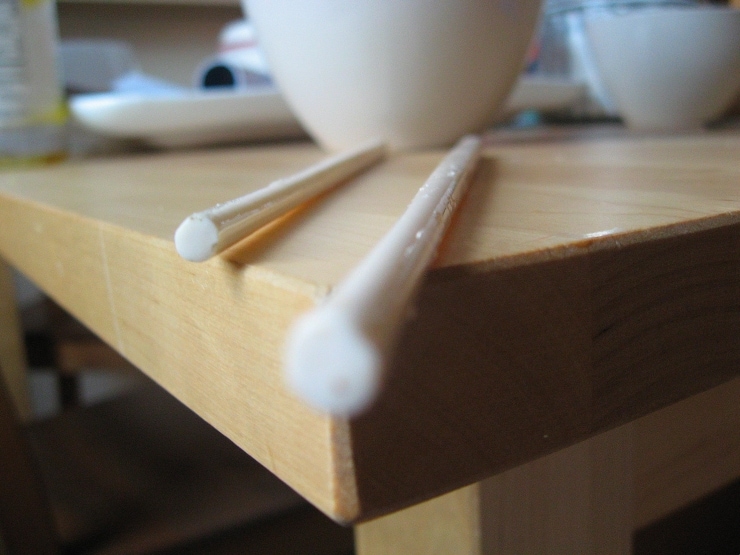 When these babies are out of the oil, drop them in some cinnamon sugar mixture, tap the excess cinnamon sugar off, and place the churros in a bowl lined with paper towels.

The churros can sit out for up to about an hour and a half without really softening up too much, but they are best served immediately with a nice cup of hot cocoa.

Make the Cinnamon Sugar: Mix the cinnamon and sugar together in a medium bowl. If you’d rather not top the churros with cinnamon sugar, read the headnotes to see other possible things you can do with the churros.

Make the Churro Dough: Bring water, butter, sugar, and ½ teaspoon of lemon zest to a boil in a medium sauce pan. Remove from heat, and stir in flour. Return pan to medium heat and cook, stirring constantly with a wooden spoon, until dough forms a smooth ball, about 1 ½ minutes. Transfer to a mixer bowl, and let cool for 3 minutes.

With the mixer (standing or hand-held) on medium speed, add the egg, and beat until the dough is smooth and shiny, about 3 minutes. (Kamran note: the dough will look curdled and weird at first, but just keep beating the mixture until it becomes smooth; the dough will be sticky).

Spoon the dough into a pastry bag fitted with an open start tip (kamran note: any size is fine, depending on how thick you want your churros). Hold the pastry bag a few inches above the oil, and pipe six to eight 5-inch lengths, moving bag in circular motions while piping to create decorative shapes if desired. Cut dough with an oiled knife. Fry, turning once, until golden brown, about 2 minutes. Drain oil off, then toss in cinnamon sugar mixture (if you decide to top them with that). Repeat with remaining dough.

Sophisticated Gourmet
Recipes in your inbox